The Case of the Bottlenecked Bicyclist

In my previous blog posting, I offered an example, from my own life, of what the philosopher Martin Buber calls a sign. We must remember that a sign is not an objective occurrence that holds the same meaning for everyone. When the Thou of the universe speaks, according to Buber, it is for your ears only. I mention all of this in the hope that you will become more attuned to the signs that are desperately seeking to speak to you. 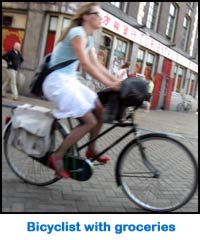 I shall now offer another example. I’ll preface my remarks by saying that a few years ago I had been very concerned with the question of how to be more effective with my philosophical counseling. I found that my clients would often reach a certain point in their self-development and then become stuck. I pondered why this was so, and what could I do to help them to become unstuck. The answer, if it was a sign from above, took the form of a rather odd incident. Once again, it involved an encounter with the feminine, only this time not in the form of an old newspaper photograph, but of an actual woman on a bicycle. I suspect that Sophia, the goddess of wisdom, can transfigure herself into just the right incarnation, as a teaching device. I wouldn’t put it past her. And so here is what happened…

A few summers ago, on a Saturday afternoon. I was taking a leisurely walk to a neighborhood cafe that was hosting a music festival. I was almost there, when I heard a woman bicyclist, in her young thirties, with bleach-blond hair, calling to me for help, from the across the street. I crossed the street, whereupon she showed me that she could not ride her bicycle home because a plastic bottle of Pepsi had gotten wedged between the front wheel and the frame of the bicycle. I asked her how it had gotten there. She explained that she had been riding with a small plastic bag of groceries, which included the plastic bottle, hanging over handle bar of the bicycle and when the bag hit the wheel, the bottle miraculously got lodged there, bringing the wheel and the bicycle to a standstill. I then tried to dislodge the soda bottle. I pulled and tugged for a few minutes, but it was absolutely stuck. The problem was that I couldn’t get a good grip on it, for only the tapered side with the cap protruded, and only a few of inches.

Then eureka! The solution dawned on me. I asked her permission to turn the knob of the bottle, emptying the contents. She agreed. I opened it and the soda quickly sprayed out like a fire hydrant. It was then very easy to dislodge the deflated bottle. She was relieved and thanked me. At that moment she took out from her shopping bag another bottle of Pepsi. For a moment it seemed like she was going to offer me some, but instead she took a swig before placing the bottle back into her shopping bag. She then lit herself a cigarette.

She expressed to me a combination of perplexity and astonishment that she had not arrived at the solution to the bottle problem herself, for she certainly seemed intelligent enough. As we talked, I too became perplexed over why the solution hadn’t occurred to her. At that moment, I knew that I was entering into a mystery. Here, again, was what Buber called a “sign,” this time taking the form of a rather odd incident. What, though, was the Thou saying to me?

I previously stated that I had been concerned with the problem of counseling. How could I help people who were stuck? Here, then, was the answer to my question. I can only express what I saw as an extended metaphor: What retards us on our journey through life is our attachment to the mother. I do not mean “mother” in the literal sense. I mean it in the way that the psychologist C.G. Jung meant it, as a symbol, or an archetype, for a certain reality that we we seek. The mother symbolizes life as sweet, easy, no work, a free ride. The sweet soft drink, that the bicyclist was carrying home with her, symbolized her attachment to the mother archetype.

The cosmic irony of the situation was that the very thing that she hoped would make her journey through life an easy one (symbolized by the bottle of soda), was what prevented her from getting anywhere in life, quite literally. The reason why the solution did not occur to her was that giving up mother (symbolized by letting the soda pour on to the concrete) was the very thing she was unwilling to do.

And so that brings us to the question of why people are stuck. Not everyone is stuck for the reason I suggested, but a great many are. Quite often, the mother wears the aspect of comfort and security. A man or a woman cannot leave a job they hate because the corporation for which they work promises to take care of them. A company like IBM then becomes “Big Mama.” On a more universal level, the mother symbolizes those habits, routines, and ways of seeing life that we know are long outmoded and which feel very confining, but which we cannot abandon. We cannot abandon them because they feel comfortable and secure, as is the realm of the mother.

I realized that to help my clients get anywhere in life, I would need to encourage them to throw away away their bottles, whether they be baby bottles, soda bottles, or liquor bottles. It would mean for them, symbolically speaking, to kiss mom goodbye and leave home. Again, I am speaking symbolically, not about one’s real mother, but about the mother archetype. As to how I have finally been able to help my clients to leave home is another story.

The Hidden Motives Behind the Balloon Boy Hoax

The Psychological Fascination with Batman

The Lost Secret of Career Success

The Deeper Meaning of “Oy, am I thirsty!”

How to Know Yourself, in Four Easy Steps

Interesting blog, but I think you read far too much into stuff. The reason she didn’t want to empty the bottle is simple: greed. She didn’t want to see half a litre of soda poured onto the pavement.

A similar thing happened to me but with much more dire consequences. A bunch of teenagers jumped me while I was walking in the park. I tried to run, but one of them grabbed onto my backpack. I could’ve slipped out of the pack and been home free, but I’d be damned if I let those punks steal my pack!

Intriguing Essay! I have always enjoyed reading your blogs but registered today to write my comments where i want to. About this symbolic incident, i agree that we are stuck due to mother archetype coz i have been experiencing that too strongly for a while now. I am happy to be in U.S but my mom’s memory and the comfort of her presence and security makes me want to go back to India and i know i have nothing meaningful to do in India( Strangely she never showed physical expressions of motherly warmth from as far back as i can remember and i even had intense rage against her for neglecting me for my one year younger sister when i was growing up) So your essay is very meaningful for me. I also notice that if i am struggling and asking questions to God, i start getting answers from someone in a weird way as if universe or God is communicating with me. What i have not understood is how you co relate bottle with mother archetype? I am sure you have something in mind and since you have been thinking longer than me, i can know more from you. Once again, i love your essays and they make lot of sense to me. Can you talk more about relationships? It would be lovely to read your thoughts. Thanks.

Thank you for your thoughts.

Also, the fact that your mother neglected you for one year might have made you a more independent person and thinker.

I’ve written a lot more about relationships, in my book: “Awakening with the Enemy: the Origin and End of Male/Female Relationships,” which is available from Amazon.com.

Thanks, again, for your thoughts.