My thoughts on mountain climbing were sparked by the recent death of a brave man, Sir Edmund Hillary. Along with his Sherpa, or guide, Tenzing Norgay, he was the first to make it to the top of Mount Everest. With all the discussion and encomium, there wasn’t any analysis of why anyone would want to climb Everest or any mountain, for that matter.

An earlier and fatal attempt to climb Everest had been made, in 1924, by George Mallory. When asked, a year prior to his ascent, why he wished to climb to the top of that mountain, Mallory famously said, “Because it is there.” It is apparent, then, that he had no idea as to his motivation, and neither do other mountain climbers. Some have suggested that it is the desire for fame that prompts a person to climb mountains, but that explanation is lacking, for many people have risked life and limb seeking to climb previously climbed mountain, knowing full well that it would gain them no fame. 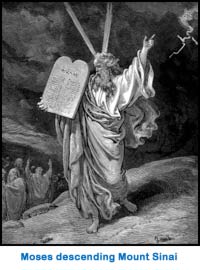 What, then, is the explanation to this mystery? I believe it was the great scholar of comparative religion, Mircea Eliade, who suggested that to reach the peak of the mountain is, symbolically speaking, to stand at the connecting point between heaven and earth, between the sacred and the profane. We find this symbolism in the Bible. God speaks to Moses when he is at the top of Mount Sinai. Standing at the peak, one has connected, in one’s very being, these two great polarities of human existence.

Reaching the peak is, therefore, a symbolic surrogate for having found meaning in one’s life. After all, meaning is that which links our everyday activities to eternal values. Meaning, in other words, connects earth and heaven. So great is the longing to make that connection, that symbolic images of making that connection appear.

Premier Post: Greetings and Welcome! What’s in a name?

The Philosophical Calamity that Created Vampires

The Dark Knowledge at the Root of Acrophobia...