There is a force in the universe — whether we call it God, the light of truth, or by some other name — that is continually trying to communicate with each of us. Whatever it may be, it does not speak English. Rather, it communicates through signs. At least, that is the term that the philosopher Martin Buber used. Buber did not offer examples, but I would say that a sign could be, for example, a haunting dream, a message on the side of a bus that communicates far more than it was intended to, the look of a child, or a wrong turn down an unfamiliar street. I shall offer here an example of a sign, from my own life.

It was about twenty years ago, around 1988, on a windy day either in late February or early March, that I took my car into a service station to be repaired. It was located on one of Binghamton’s oddest looking dead-end streets, inhabited by a newspaper recycling business, a motorcycle shop, a plate glass repair, a Howard Johnson’s restaurant, and other such commercial ventures that looked like they hadn’t changed the slightest in the last fifty years. Rather than calling a friend or a taxi, I decided to get some exercise and walk home. Perhaps, it was the setting sun over the odd looking landscape, but I was beginning to get a feeling of being alone, unknown and unrecognized. Whatever fame that I had sought, over the years, had eluded me, and I felt “in disgrace with fortune and men’s eyes.”

To return home, I had to cross Route 17. There is a long and narrow pedestrian bridge that crosses over that highway. I got about halfway across the bridge when I saw a sheet from an old newspaper. I can’t remember whether it was from the Daily News, the Post, or the Herald Tribune, but I do remember that it was from the early 1960s. How could a paper from that long ago could have gotten there, and why hadn’t the elements destroyed it by now? I conjectured that, somehow, it must have blown there from the newspaper recycling plant. Why, though, would it take them about 25 years to recycle a newspaper? Maybe it had accidentally fallen behind one of the recycling machines, and hid there. I still have no idea. 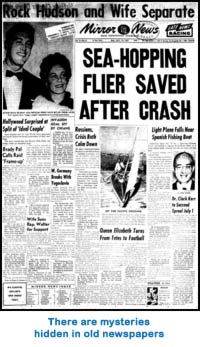 I picked up the folded sheet of newspaper and started reading it. On the inside was a Broadway gossip column, perhaps by Earl Wilson or some other journalist popular back then. It had a photo of a beautiful Latin singer and dancer. The article said that this rising star would be performing at the Copacabana or some similar venue.

As I read through the article about the singer, I was knocked over by a wave of emotion, which I can best describe as a sublime sense of life’s transiency. Whoever the beautiful Latin singer was, she was now in her fifties, and her nightclub appearances had probably long been forgotten. It put the painful sense of my own obscurity into perspective, for everything is eventually blown hither and yon by the winds of time. The feeling, though, was not heavy or depressing, but sublime and liberating. And so, Buber is right — there are signs that are heaven-sent and the wind had blown one to me, in the form of an old newspaper. And, in an act of grace, the wind then blown away my sadness and regret.

Part Two, of the Case of the Blown Newspaper

I shall preface my remarks by stating that a revery, or daydream, can sometimes be even more powerful and insight-laden than a dream. Reveries are very brief, and so we are most apt to forget them, which is unfortunate. In any case, I had completely forgotten about discovering the old newspaper, on the bridge, for over twenty years had elapsed. But only last year, which was 2007, something occurred that evoked that memory.

I was slated to offer a few non-credit seminars, at a local community college. Along with courses on yoga, PowerPoint, and Chinese cooking, were my popular philosophy seminars. The dean of the college was sure that they would be a big hit and so, on the page where my seminars were listed, she included a large photo of me. A lot of people in town received the course catalogue and saw the philosophy seminars, and my photo. I received a goodly number of compliments about the photo, along with promises that they would surely be attending the fascinating seminars. Yes, I had achieved minor celebrity status, very minor as it turned out.

Two days before the seminars were to run, I received a telephone call from the dean’s secretary. All three courses were being canceled, due to inadequate enrollment. Ah, another disappointment! Tired, I lied down on my couch. As I was drifting off, I had a reverie, which lasted perhaps a second, but was intense enough to make me jump up from the couch. I saw myself on the very bridge that I had crossed some twenty years back, on my way home from the auto-repair shop. In the reverie, I was halfway across the bridge, when I picked up a very old community college course catalogue, with yellowed, crumbling pages. On it, I saw my photo, along with the blurbs of the seminars that I had been slated to teach! The sublime feeling returned, only it was more powerful this time, for I was not viewing the photo of the Latin singer, but a photo of myself. I remembered, then, that no matter how successful I become in my teaching and counseling, everything that I accomplish is still subject to mutability and decay, and may end up like papers scattered to oblivion by the wind.

That insight has not diminished my efforts, for no one can foresee from whence and to where the wind may scatter the seeds of spiritual renewal. Thus did the wind blow through my soul, rekindling my inner fire.

“Scatter, as from an unextinguished hearth
Ashes and sparks, my words among mankind!
Be through my lips to unawakened earth
The trumpet of a prophesy! O, wind,
If Winter comes, can Spring be far behind?
— Percy Bysshe Shelley

The Case of the Bottlenecked Bicyclist

Living in the Moment, for a Moment

Swine Flu: The Dark Side of a Borderless...

The Deeper Meaning of Adultery

The Dark Knowledge at the Root of Acrophobia...

The Symbolic Appeal of Hatha Yoga & the...

When the Door to the Bus Opens, Get...