Out of the millions of people who smoke cigarettes probably not a single one of them knows why. Nor do the great majority of psychologists and psychiatrists understand why people smoke. Nor do the well-meaning folks at major health organizations, such as the American Cancer Society and the American Lung Association.

If you ask a so-called expert, he or she will offer you the familiar explanations, such as people smoke because they see other people smoking. There’s some truth there, but it’s merely a reductio ad absurdum argument, for it fails to explain why anyone smokes in the first place. Then there’s the dubious explanation that cigarettes are an oral fixation, but there’s lot of things that people could stick in their mouth. Why burning leaves?

Why, then, do people smoke? It was back in the 1930s that one of the great philosophers of the Twentieth Century solved the enigma. He analyzed smoking  — and many other things as well — in a difficult book that few people read today. His explanation initially sounds far out. But when you think about it, you realize, by golly, he’s right!

Mes amis, it was Jean-Paul Sartre, the French existentialist. In “Being and Nothingness,” Sartre says that he would smoke everywhere, in the Parisian cafes, at the theater, on walks, and so on. The act of smoking made him feel free of the limits that he experienced everywhere he went. What sort of limits? There are, of course, the usual limits that we experience as finite beings. For example, we can’t fly, like a bird. We can’t be in two places at the same time.

But I think that Sartre was really referring to the limiting structures that the social world imposes on each of us. For example, especially if you live in the city, you find yourself waiting on line everywhere — in restaurants during lunch hour, in banks and being slowed down on the highway. And wherever you live, you’re required to deal with large bureaucratic organizations — from insurance companies to the Department of Motor Vehicles, from the tax department, to those that regulate how you do business. They all requires that you to complete long applications, comply with complex laws, and if you attempt to contact them with a question, you must, at the prompt dial three, and then enter your social security number, and so on. We encounter laws, regulations, rules and structures everywhere, which limit our freedom and oppose our will.

The smoker sucks in the world, such that it no longer limits him. Smoking, then, is an anarchistic activity — Vive la Revolution — for the smoker symbolically seeks to destroy the entire world, and in so doing to attain freedom from the limits that the world imposes on him.

Now this is the thing: Obviously smoking doesn’t destroy anything, other than a cigarette and also one’s lungs. After completing the smoke, the world is still there in all its limits. You would think, then, that the smoker would abandon smoking, for it failed to accomplish what it promised to do, i.e., to destroy the world and all its limits, and set him free.

But instead, the smoker — just as anxious as before, and knowing full well the futility of the activity — anxiously grabs another cigarette. And this leads us to the mystery of addictions. It’s been rightly said that at every moment life asks us certain ultimate questions. One question is how can you be free? The destructive activity, known as cigarette smoking, is one such unsatisfactory answer to the question. And, although he doesn’t consciously realize it, the smoker’s answer is: “I can be free by symbolically destroying the world.”

Despite the inadequacy of the answer, a person continues to do it. And the reason why, as it all addictions, is that he or she continues to do it because, psychologically speaking, it seems better to do that which cannot work, than to admit to oneself that one has no answer to the question of how to be, how to be free as an individual in the world.

Here, again, in all cases, an addiction is an answer to an ultimate question, one that fills us with anxiety. It’s an inadequate answer, but we continue to desire certain things or to engage in certain activities out of despair, because we don’t have a true answer. But if you realize what is really at issue with any addiction, you then have an opportunity to uncover the hidden question and to find a satisfactory answer. And yes, Sartre claimed that his analysis did free him of his smoking habit.

Here is a link to the video of which the abolve is, more of less, a transcript:

The Mystery of Smoking

What is anxiety? It’s not synonymous with stress! Rather, stress is merely the physical dimension of anxiety. In other words, stress is how anxiety registers in your body. In your shoulders, your head, in your arms. 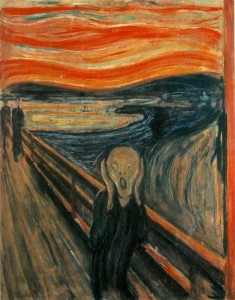 Soren Kierkegaard once wrote that the soul is educated through anxiety. Ultimately, anxiety can be a road to inner-peace, wisdom and self-realization. Keep that in mind as we plunge into the depths…

I don’t know where you’re standing or sitting, at this moment. It may be in your living room, or your office at work, or you’re standing on line, at a coffee shop. But whatever the case, imagine now that you glance down and, instead of seeing the floor, you see that you’re standing over nothing! Yes, you’re standing over an abyss, one that’s infinitely deep. So how do you feel at this moment? You probably have a terribly sickening feeling of vertigo. Maybe the room is spinning. That vertigo is what we experience when we discover that we no have a ground to stand on. And that is the moment of anxiety.

What, then, does it mean to have a ground? And what does it mean that what we take to be our ground turns out not to be a firm foundation? A clue to these questions might be found in yet another question: What is it that you do that gives your life meaning, purpose or direction? Isn’t that your ground?

For example, let’s say that you subscribe to a certain belief system. It could be a religious belief, or even a secular or scientific worldview. Or it could be a political belief. It could even be another person who gives your life meaning, such as a movie star, or a political leader or even someone to whom you are married. You live your life around this person or belief system. He or she or it becomes your center, and provides you with orientation. And so you ask, for example, “What would Elvis do?”

Well, something happens. Perhaps you outgrow your belief system. “When I was a child, I spoke as a child…” Or you find it riddled with insuperable contradictions. As a system, it’s no longer able to organize your experience into a unitary and coherent whole.

Or after being married, you find that the person you loved, or at least you thought you loved, has never ever really reciprocated. It’s all been a charade. Or you discover that the person to whom you devoted your life has clay feet. Yes, the emperor has no clothes.

In all cases, you suffer disillusionment, but it actually feels like the ground has dropped from under you. In one sense, it’s very good to no longer live in illusion. The problem, though, is that now you no longer have a ground. Or, another way of conceiving it is that you no longer have a center.

Actually, the truth is that you never really had a ground. It’s just that at certain dreadful moments you come to look down and then realize it. Yipes! And when you do, you go plunging into the abyss. Without a ground, a person feels unreal. Why is this so? That’s a difficult question, one that we may explore subsequently.

[Dear Reader, This is more or less the transcript of the video, with minor improvements in the wording. Please scroll down to the bottom of the post to find the video. Thank you, Mark]