The Secret of Uncanny Valley 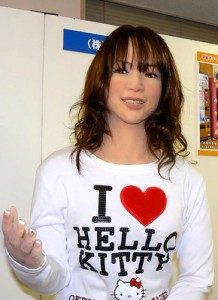 Japanese scientists have been making rapid strides creating automatons that look and act like human beings. But, in recent years, they’ve encountered a disturbing phenomenon. Mori Masahiro, the roboticist, named it “uncanny valley.”

Here is what happens: Up to a point, the more lifelike a robot appears, the more favorable will be our emotional response to it. Were we to represent this on a graph, we would see an upward pointing diagonal line, representing the positive correlation between a robot’s lifelikeness and emotionally warm feelings on our part.

To represent this shift — when the correlation between lifelikeness and affection becomes negative — the line on the graph precipitously descends, creating a dip, or valley, known as “uncanny valley.” (For more information on this, see the article in Wikipedia: http://en.wikipedia.org/wiki/Uncanny_valley)

A number of “scientific” explanations for uncanny valley — from the fear of death to poor mate selection — have been proposed, all of which derive from theoretically ungrounded abstractions.It is not surprising that scientists — tending to be out of touch with their emotions, fearful of the irrational and disdainful of metaphysics — would formulate such farfetched theories.

What, then, is really involved here? The revulsion to hyper-realistic robots is but a species of the uncanny. Exploring some of its other varieties may offer us clues to this intriguing mystery. As we’re about to discover, the dip, or valley — that these robotic engineers have stumbled upon — leads down the metaphysical rabbit hole, through a kind of worm hole, to the edge of the intelligible world.

In his intriguing essay on the uncanny, Sigmund Freud offers a valuable clue to its meaning:

“The German word ‘unheimlich’ is obviously the opposite of ‘heimlich’ [‘homely’], ‘heimisch’ [‘native’] the opposite of what is familiar; and we are tempted to conclude that what is ‘uncanny’ is frightening precisely because it is not known and familiar. Naturally not everything that is new and unfamiliar is frightening, however; the relation is not capable of inversion.” (Essay on the Uncanny, by Sigmund Freud)

Freud then proceeds to analyze what he considers to be the factors that, under certain circumstances, make the unfamiliar frightening. We wont explore Freud’s psychoanalytic theory of repression and the uncanny. Suffice it to say that like other theories of the uncanny, Freud’s theory fails to discern the very key to the phenomenon.

It is neither the unknown nor the revelation of that which had been hidden (or repressed) that is most terrifying, but rather the loss of the familiar! Another way of saying this is that it is not leaving home that invites the uncanny. What is most frightening is when home begins to look disturbingly strange. Let us consider several instances of this phenomenon, before finally returning to the subject of robotics.

An example from my own life comes to mind. It is akin to the Uncanny Valley in so far as it involves a disturbingly close resemblance between the real and the unreal. As a child, I remember getting lost several times and, just for a 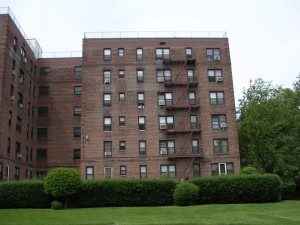 moment, being relieved to find my apartment building. (see photo)

Ah, but then a moment latter I realized that it was not my apartment building, but one that looked just like it. That was an easy mistake to make, because the apartment house in which I grew up, as a boy in Brooklyn, NY, was identical to about thirty other apartments in the same building complex.

The feeling of being lost is very unpleasant, and can be a dreadful one for a child. But the feeling of mistakenly taking the wrong house to be one’s own evokes the horror of the uncanny. The same sort of horror is evoked when as a child I became lost and would, for an instance, think that I recognized one of my parents, only to realize that it was a stranger who resembled either of them.

Alfred Hitchcock has a moment like that in his classic film “The Lady Vanishes.” (1938) There is a moment when the protagonist believes that he has found the missing Ms. Froy, sitting on the train. But when the women turns around, he realizes that it is someone else, who vaguely resembles her. The viewer of the film experiences the queasiness associated with the uncanny.

The Uncanniness that Emerges from Self-Reflection

A particularly powerful experience of the uncanny can occur at a moment of self-reflection. Indeed, imagine looking into a mirror and feeling like one is viewing a stranger. The sociologists Peter L. Berger and Thomas Luckmann suggest that that experience is not uncommon. But human beings have ways of fleeing from the import of such metaphysical terrors. The authors offer an example of how a morning train ride to work is used by many people to exorcise such uncanny perceptions.

“The individual may not know anyone on the train and may speak to no one. All the same, the crowd of fellow-commuters reaffirms the basic structure of everyday life. By their overall conduct the fellow-commuters extract the individual from the tenuous reality of early-morning grogginess and proclaim to him in no uncertain terms that the world consists of earnest men going to work, of responsibility and schedules, of the New Haven Railroad and the New York Times. The last, of course, reaffirms the widest coordinates of the individual’s reality. From the weather reports to the help-wanted ads it assures him that he is, indeed, in the most real world possible. Concomitantly, it affirms the less-than-real status of the sinister ecstasies experienced before breakfast — the alien shape of allegedly familiar objects upon waking from a disturbing dream, the shock of non-recognition of one’s own face in the bathroom mirror, the unmistakable suspicion a little latter that one’s wife and children are mysterious strangers.” (“The Social Construction of Reality.” Anchor Books: 1967, pp. 149-150)

And, as Berger and Luckmann point out, one can have the perception that one’s spouse and children are complete strangers. In a very real sense, it may be true. It’s just that one never realized it before. There was a film very aptly named “Lovers and Other Strangers.” (1970) In any case, these are powerful perceptions of the uncanny.

A Schlemiel Experiences the Uncanny

Let us consider one last example of this phenomenon. Some years ago I read a story by Isaac Bashevis Singer entitled “When Schlemiel Went to Warsaw.” (1979) It is about a foolish fellow, a schlemiel, who decides to take a trip from his home town to Warsaw Poland. As far as I can recall, about half way to Warsaw, he takes his boots off, and points them in the direction of Warsaw. Then he goes off to sleep.

If I’m not mistaken, an elf of some sort reverses the direction of Schlemiel’s boots. Consequently, when Schlemiel awakens the next morning — not realizing that his boots have been turned around — he unwittingly proceeds back to his hometown imagining that he has arrived in Warsaw.

How strange, Schlemiel foolishly thinks, that everything in Warsaw is exactly like it is in his hometown. There is even a house like his house, with a woman who claims to be his wife!

Singer’s story about Schlemiel is invariably mistaken for a humorous children’s story,  but beneath the surface of this amusing tale lie the terrors of the uncanny. Singers story resonates with his readers, for there are frightening moments when we awaken to realize that everything appears to be the same but is not at all! What, then, is the difference? It’s rather hard to get a hold of. In truth, the place is the same, but something has happened to the person, thus making the place look different to him or her.

Singer’s story illustrates what happens when we begin to awaken, not just literally as happened to Schlemiel, but in the deeper sense of… 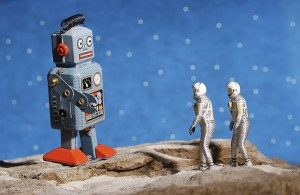