The Deeper Mystery of the Faux Brownstone

“…for the soul is dead that slumbers, and things are not what they seem.”— Longfellow

There’s an apartment building in Brooklyn, New York that’s not really an apartment building. On the contrary, it’s really a secret subway entrance! [See photo of faux building.] Furthermore, there are secret subway entrances, disguised like this one, throughout New York City. A news item about the faux brownstone recently appeared in a number of New York City papers. Apparently, it captivated quite a few readers, as it did I.

What is it about this fake building that is so fascinating? Why are such appearance/reality mysteries so intriguing?

Before we delve into the heart of the real mystery, which is metaphysical, let’s try to understand the ostensible mystery. Why did the MTA — the agency that runs the New York City subway system — wish to build a subway entrance at that particular location? One cannot, from the various newspaper accounts, discern precisely why. Some suggest that it has something to do with counter-terrorism. But it’s unclear as to how these disguised entrances would function in that capacity or as part of any other stealth operation.

Furthermore, the people living in the neighborhood of this particular faux brownstone have long known that it’s a secret subway entrance. We also learn, from the newspaper articles, that workers with the MTA will often enter and leave the secret entrance and have their lunch on the steps of the building. So it can’t be all that much of a top secret.

Let’s say that, for whatever the reason, the MTA needed to have a subway entrance at that particular location. Perhaps, then, they thought that it should be aesthetically pleasing, that it blend in with the surrounding buildings and not be an eyesore. All that is reasonable enough.

Yes, the MTA used both security and aesthetics to justify the project. All the same, unless city workers have souls of mud, the clandestine project must have really intrigued them, even if they could not admit it, for fear of having the expenditures for the faux building scrutinized by the taxpayers. Perhaps, they thought to themselves: “Wow! We’re building a secret subway entrance, disguised to look like a brownstone. Holy James Bond! This is super cool!”

The deeper question here is not about the motives of the MTA. It’s really about why secret entrances — and all things disguised — engender a certain thrilling sense of wonderment and perplexity? They seem to tap into the fundamental metaphysical belief that things are not what they seem. Indeed, it evokes the appearance/reality distinction, that lies at the heart of philosophy, mysticism, and paranoia. The notion that we are sleepwalkers in a dream — one from which, with great effort, we can awaken — is a very old notion. We find it in the ancient Hindu Upanishads and in Plato’s Allegory of the Cave, in The Republic.

If the defining moment of ancient philosophy was Plato’s Allegory of the Cave, the seminal moment of modern philosophy was Descartes’ metaphysical doubt, which he resolved — perhaps a bit too facilely — by his realization “I think, therefore I am.” And we find this same doubt expressed in films like The Matrix, and The Truman Show.

Odd though it may seem, everyone suspects that things are not what…

The Aesthetic Mystery of a Fantasy Clock

On the first Friday of every month, various cities throughout America hold an art walk. If you’ve never been on one, it simply consists of strolling from gallery to gallery, looking at art, partaking of wine and cheese and schmoozing. I’ve been attending Binghamton’s art walk, for over five years. Being that I’m on a limited budget, I’m not much of an art collector.

But two weeks ago, I saw a sculpture, in the Orazio Salati Gallery, that really intrigued me. It’s creator, Richard Birkett, entitled it “Fantasy Clock.” He’s done an entire series of these mechanical assemblages. The one that was on display was keeping good time. And when I wound a certain knob, it played the old standard “As Time Goes By,” while a miniature airplane circled overhead.

I was intrigued enough to purchase the sculpture and to give it a new home, my living room table. Strange though it may sound, I find gazing upon it to be therapeutic, centering, restorative of my wholeness. There are beautiful works of art, works of literature and musical passages that have that salutary effect. Of course, if this be beauty, it is of an odd sort, for the fantasy clock consists of an assemblage of knobs, screws, and bolts, some of which are rusty.

I’ve been perplexed by this strange contraption. Why do I find it visually pleasing? And what is the source of its power as a healing talisman?

The Fantasy Clock evokes nostalgia for an earlier time in history, as suggested by the airplane from an earlier decade of the last century, by the song, “As Time Goes By,” and by the antique photo of a woman wearing a peculiar looking hat. All of this is congruent with the mechanical parts, suggesting the technology of an earlier age, before gadgets became digitalized and run by microprocessors. Antiques and collectables have the power to draw us into the past.

Nostalgia is really a longing for home, not just the place of our birth, but our home in the ontological sense. By this I mean the longing for a time when we were not alienated individuals, fallen beings, but experienced a oneness with the world. The scholar of comparative religion, Mircea Eliade, has referred to that time as Illo Tempore, which, as Eliade understands it, is that mythical time before the fall into historical time.

But an age of innocence is essentially a psychological construct for, as Eliade informs us, even inhabitants of the most primitive societies, jungle dwellers, have a longing to return to an earlier time, for they too feel like fallen beings. So it is that to be human is to feel alienated and to long for home, i.e., for our lost wholeness.

Of course, an antique or a collectable can no more bring us back to an earlier age then can an historical novel or a film about the past. But it is healing, all the same, for we imaginatively participate in those mythic events.

There are, according to philosophers, like Burke, Kant and Schopenhauer, two types of aesthetic experiences — the beautiful and the sublime. The beautiful reveals that we are harmoniously connected to the world. The sublime, on the other hand, threatens to engulf and overwhelm us, destroying — by its majestic power — any harmony that we might seek with the world.

The sublime is often rendered artistically, in paintings of the 19th Century Romantic era — such as those by Casper David Friedrich — as gigantic mountains, raging seas or scenes of terrible destruction. The destruction wrought by time also has a sublimity. Indeed, one of the most sublime passages in all of literature is from Shakespeare’s “The Tempest.” As Prospero, the plays magical protagonist, states:

Our revels now are ended. These our actors,

As I foretold you, were all spirits and

Are melted into air, into thin air:

The cloud-capp’d towers, the gorgeous palaces,

The solemn temples, the great globe itself,

Yea, all which it inherit, shall dissolve

Leave not a rack behind. We are such stuff

As dreams are made on, and our little life

Is rounded with a sleep. 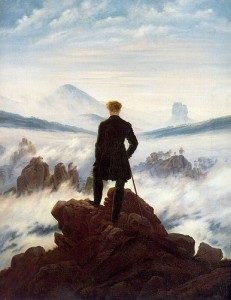 Wanderer Above the Sea of Fog, by Caspar David Friedrich

The ultimately destructive effects of time make the world seem no more substantial than a dream. And yet, the experience of the sublime can be joyously liberating. How so? According to Karsten Harries, in The Meaning of Modern Art (Northwestern, 1968), the sublime reveals the numinous, the mysterious, the divine. It reveals the works of a god that cannot be measured by finite human reason. But the sublime also reveals our inner freedom. In other words, the sublime invites transcendence from the prison house of this world, from the daily struggles, concerns and anxieties that fill our days.

Back to the Fantasy Clock

So the question arises as to the type of aesthetic experience that the Fantasy Clock elicits. Is it the beautiful or is it the sublime? I had suggested that the clock imaginatively evokes an earlier age, as do antiques and collectables. In so far as it evokes feelings of harmony with the world, it is beautiful. Indeed, the arrangement of the various parts of the clock is displays a beautiful sense of proportion and harmony. In gazing upon the clock, it brings sweet harmony to the chaos of our lives.

But the Fantasy Clock is composed has metallic parts which are covered with rust. It is that rust — as well as the old song, the photo, and the antiquated technology — which evokes the destructive and yet liberating dimension of time, the mood captured by Prospero’s speech. In that sense, it evokes the sublime.

Perhaps, then, the healing power of the Fantasy Clock lies in its ability to balance the beautiful with the sublime, to balance harmony with the world with a world transcending freedom.

There are other ways to conceptualize Birkett’s Fantasy Clock. It can be viewed through the prism of sculptural collage, steampunk, abstract expressionism and other artistic genres. Each conceptual schema is a doorway into life’s enigmas. In this short essay, we have entered through only one of them.