“Every parting is a foretaste of death, and every reunion a foretaste of resurrection. That is why even people who were indifferent to one another rejoice so much when they meet again after twenty or thirty years.” — Schopenhauer (Essays and Aphorisms)

I recently joined Facebook®. I thought maybe by networking I could get the word out about my philosophical counseling and life coaching practice.

A few weeks ago, thanks to Facebook, I was delighted that a cousin of mine, whom I had not spoken to in quite some years, reconnected with me via Facebook. Then, only last week, I heard from a third cousin, whom I hadn’t ever met before. She had, though, been briefly acquainted with my mother and my sister. But that was over 30 years ago. I was glad that she wrote me, for it is apparent that she is a very fine person. But, I was a bit surprised, by the enthusiasm and sheer joy that overflowed her e-mail. To her, this reconnection of distant relatives was an event of great moment.

Re-read the quote by Arthur Schopenhauer. He was not a Christian philosopher, and so it is not clear why Schopenhauer would write of resurrection. But resurrection can also be taken in a symbolic and mystical sense. I really think that my third cousin’s joy of reconnecting with her long-lost relatives is symbolic of a deeper interest, the longing for self-renewal and rebirth. That longing grows when one enters one’s fifties, unless, of course, one has already experienced rebirth, in any one of its varieties.

The thing to do is to reconnect with one’s true self, the Self that is more primary than one’s ego. That would be a most joyous reunion, a true resurrection! There is, then, one face that one will never find in Facebook. It is, what the Buddhists refer to as “the face you had before you were born.”

You can tell a lot about yourself from the jokes that make you laugh. And you can tell a lot from those jokes that don’t go down so well, in your system. So, it is that jokes are a Rorschach test, as valid as any inkblot for revealing who we are. Which leads me to my story…

The other day I attended a talk given at a local bookstore. The speaker was a joke writer for a national humor magazine, as well as a former stand-up comic. He told the audience that his friends often sent him jokes that they wrote, but that they were rarely funny. Ironically, the joke that he offered as an example of an unfunny joke, written by a friend of his, was the only joke that really made me laugh that evening.

The joke goes like this: “Did you hear that Coke®, in an effort to attract Pepsi drinkers, just came out with Pepsi® flavored Coke?”

The joke has to do with the contradiction between character and worldly success. In order to succeed in the world, we must, to varying degrees, be who we are not. At one extreme, there are celebrities whose public persona is quite different from their true self. At the other extreme is the person whose persona corresponds to his or her true self. Most of us fall somewhere in the middle.

And that is what the joke is really about. Thus, Coke® can create Pepsi-flavored Coke® to lure Pepsi® drinkers. But, in seeking to be successful, to get more customers, it would lose its very identity. After all, if Coke was Pepsi-flavored, it would not longer be Coke.

In point of fact, Coke tried that some years back. It came out with New Coke®, but when its marketing strategy backfired, it came out with Coke® Classic. Behind all of this are people anxious unconscious questions about… 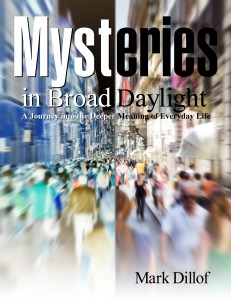